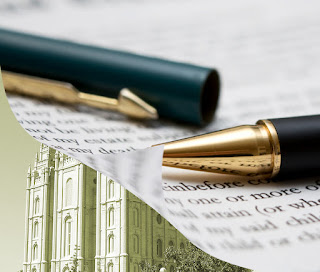 SALT LAKE CITY, UT—Deseret Legal recently announced new options for those seeking the increasingly popular prenuptial agreements for their temple marriage.  “With temple marriages almost as vulnerable as any marriage,” said Deseret Legal spokesperson Denise Hughes, “saints want to protect themselves just in case their eternal marriage isn’t quite as eternal as they had hoped.”


“Many individuals worry about child custody,” said Hughes, “so we offer options, including a pre-marriage agreement that will guarantee full primary custody of all children with the exception of crying babies, surly teenagers, or any offspring with the propensity to projectile vomit on the carpet.” Deseret Legal calls this option PCGO, or “Primary Custody of the Good Ones.” Hughes went on to explain that this even requires that the other spouse “take any children resulting from the ill-fated union to Bishops, Branch Presidents, Stake Presidents, Area Authorities, pastors, rabbis, therapists, law enforcement officials, parole officers, rehab counselors, or dentists when the need presents itself.”

It is not just custody issues that Deseret Legal has in its new prenup options. “Many young people, women especially,” expounded Hughes, “worry about the possibility of ever getting married again if the marriage they are currently planning fails.”  It is for these people that Deseret Legal has developed the Guaranteed Post-matrimonial Sexual Status clause or GPSS.  According to Hughes, “the GPSS means that a young woman can know that her official post-matrimonial sexual status will be the legally binding and universally recognized status as ‘Unlicked Cupcake, Unchewed Gum, and Still Fresh-as-Spring Flower’ no matter what.”  Hughes added that “this puts so many young female minds and hearts at ease.”  When asked about male options, Hughes said that the GPSS offered in male prenuptial agreements is ‘May Now Have Somewhat of a Clue As to What He’s Doing’.”

Updates have also been made in the fault areas of these agreements.  Fault areas include parts of the contract that give one spouse greater property or financial compensation if the other spouse is found to be at fault.  Spouses can now get a much larger share of the marital assets if the other spouse “becomes involved in Essential Oils, supplement companies, colonic treatments, and any multi-level marketing businesses or general snake oil crap.”

Some of the fault clauses are gender-specific.  Contracts can stipulate the husbands are entitled to more if the wife “hung around church on Sundays talking to the most annoying people after the contractually agreed upon 45 minutes” or if she “failed to complete/nag until completion of any Eagle Scout projects.”  Women can get a larger settlement if it can be proved that the husband “consistently wore colored shirts to church,” “just had the kids watch videos on his phone instead of really working with them,” or “allowed his eyes to linger too long on the Sports Illustrated swimsuit issue cover.”  Said one engaged woman, “just knowing that if he so much as notices some half-naked actress on the cover of GQ means that I can have the house, the boat, and two thirds of his retirement reassures me that I can make this marriage work. Or not.”