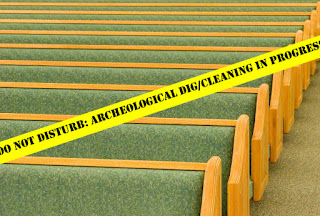 PROVIDENCE, RI—Graduate student Helen Moore recently reconstructed 20 years of sacrament meetings from the evidence she collected while cleaning one pew in a local chapel.  Moore, a student at Brown University’s Joukowsky Institute for Archaeology & the Ancient World, said that “once you see what is really going on with the pew, the micro particles in the fabric cushions, debris caught between cushions and seatbacks, and artifacts near the base, cleaning the chapel becomes an act of historical and cultural discovery.”


Moore did not anticipate such an archaeological trove when she showed up with her Ipod on Saturday morning. She did not want to mop the bathrooms again, and washing the windows with four primary children running around “seemed like a hopelessly Sisyphean endeavor,” reported Moore.  When Moore began cleaning the 3rd pew from the front “just as something new to do,” she was shocked at what she found.

“I knew that there would be food particles,” explained Moore, “but the variety of midden was truly amazing.” Moore reported that “to the untrained eye the stratigraphic layers of archaeological material can be hard to distinguish, but (in and around this pew) they were remarkably clear and consistent.”  Moore further elaborated on how “beyond the ground up Cheerios found at all layers of my investigation, it was at lower ones that I found cereals that have long since become extinct, including Cap'n Crunch’s Choco Crunch, Smurf Berry Crunch, and even Dino Pebbles.”  It was the discovery of Berry Berry Kix, a discontinued cereal introduced in CE1992 that pushed Moore to dig deeper. “At first I had no idea what I was looking at,” stated Moore.  Moore continued, “among the goldfish cracker fragments I saw colorful nutritive particles that I could not identify, but once I got them back to the lab and ran a phytolithic analysis, sure enough, it was the rare General Mills cereal at exactly the level one would expect.”

Moore made several other key discoveries that helped her recreate nearly two decades of religious and cultural rituals at the site. “Some key artifacts really made it easier to fit all of the pieces together,” said Moore. When asked about those artifacts, Moore mentioned a piece of a sacrament program outlining the now discontinued practice of a “Missionary Farewell,” a stylus trapped in a pew cushion from an old PDA (Personal Digital Assistant) circa CE2003, and a scrap of paper from the “Daily Tasks” portion of a Franklin planner page. Said Moore, “like so many other archaeological sites, this one was a rich source of primary evidence resulting from both historical accidents and lapses in ancient and contemporary cleaning protocols.”