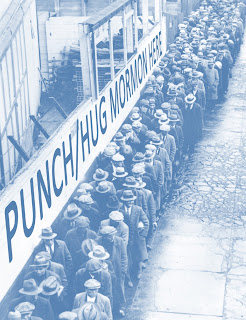 SPIRIT WORLD—David Holiday, recently deceased latter-day saint and former member of the Portland Oregon 3rd Stake Presidency, has found that thus far his experience of the Spirit World is mostly two almost endless lines of people who either want to hug him or punch him.

“Yah, I mean I was pretty surprised when I got here,” reported brother Holiday, “since the first thing that happened to me was some guy punched me about 4 times in the stomach and head.”  Brother Holiday explained that “it turned out that it was Dan [Peters], our old next-door neighbor, and let me tell you, he was pretty upset that I had never mentioned the gospel or even given him a pass along card.”

Brother Holiday was equally surprised at what happened next: “this really nice lady threw her arms around me so tightly, and she was just shaking with tears of joy and gratitude.”  “When I could finally pull away a bit, I realized that I had no idea who she was,” explained Holiday.  “Well, it turned out that I had found her name when I was a 13 year-old boy scout working on my genealogy merit badge, and because of that her temple work was done.”

Just as this sister was stepping aside, Brother Holiday reported that “I was being kicked really hard in the shins by some man.”  When asked about the attack, the men explained that Brother Holiday had sat next to the man on a flight from Denver to Wichita, “but didn’t even open his mouth about the eternal blessings of families.”  The man elaborated, “I recognized him right off—Delta Airlines flight 265, seat 21b—and now that I know about the gospel, I can’t believe that he just ate his peanuts and dozed off.”

For his part, Brother Holiday has found the experience “jarring, to say the least.”  “When I look down one line, I think ‘Oh, that must be my great-great-uncle twice removed whose temple work I did—that is going to be awesome,’ but then I notice Henry Jenkins, my best friend in middle school in the other line and I think, ‘wow, he looks pissed!’”